In 1973, six-year old Phyllis Webstad of the Stswecem’c Xgat’tem First Nation began her education at an Indian residential school at a Catholic mission in her ancestral homelands in what is known today as British Columbia, Canada. Eager to wear the new orange shirt given to her by her grandmother for her first day at residential school, Phyllis quickly learned that to attend an Indian residential school meant that she would not only be stripped of her cherished orange shirt, but that she would just as quickly be deprived of the love and autonomy she once knew among her own people.

Indigenous people in the so-called U.S., Canada, and the islands of Hawaii are either survivors or descendants of survivors of a devastating legacy of oppressive education policies that began with Indian boarding schools in the late nineteenth century, beginning with the first Indian boarding school in the U.S. at Carlisle Indian Industrial School, founded in 1879. For more than 100 years after the doors of Carlisle Indian Industrial School opened, compulsory education was used as a tool to break the spirits of Indigenous children in the U.S. and Canada while forcefully assimilating them into Western culture.

Wearing Orange to Heal and Remember

For years, Phyllis Webstad avoided wearing the color orange, as it triggered memories of the cold treatment she endured while at residential school. Years later and in an effort to heal, Phyllis embraced the color orange again as an adult. “Every child matters,” became the motto of what soon became Orange Shirt Day, honoring even the wounded inner child within the adult survivors of Indian residential schools in Canada. The “orange shirt movement” quickly spread to the U.S., resonating with Indigenous people who either survived or descended from boarding school survivors.

“Orange shirt day reminds us of the violence and trauma that forced education imposed on our relatives,” says Mary Bowman (Oglala Lakota), NACA Inspired Schools Network (NISN) Fellow and NDN Collective Education Equity Team member. “Parents had their children taken away to boarding schools so that they would ‘assimilate’ and forget their language and culture. Too many of our relatives did not come home, and too many carry historical trauma today. We pray for the ones lost that didn’t come home, we remember them, and we pray for healing for survivors.”

While some children did return to their Tribal communities after attending and surviving Indian boarding and residential schools, countless other children died while under the watch of residential school officials– some dying of malnourishment, abuse, poor health, or broken hearts.  Other children perished while attempting to run away from the schools, fleeing a range of sexual, physical, spiritual, and emotional abuse.

“We remember our wakanyeja, our sacred beings that never made it home,” said Amy Sazue (Oglala Lakota/Sicangu Lakota), NDN Collective Education Equity Organizer. “We honor them and work to protect all of our children now and in the future. I observe Orange Shirt Day by acknowledging the connection to my children that was intended to be broken as their mother and first teacher and honor the gift of motherhood by cultivating a life where they are loved and protected. This is my hope for all of our children.”

Phyllis’s story is just one story of many similar stories of Indian residential school survivors who seek to heal from the residual effects of oppressive education policies designed to break up the Indigenous family structure, and, in the words of Captain Richard Henry Pratt, founder of Indian boarding schools, “kill the Indian” and “save the man.”

While compulsory Indian boarding school ended in the U.S. in the 1960s and the last Indian residential school shut down in Canada in 1996, schools continue to be places of mistrust for many Indigenous people.

“Today for Orange Shirt Day, we honor the abinoojiiyag (children) who were taken from us too soon,” says Korina Barry (Anishinaabe), NDN Collective Managing Director of NDN Action. “Our people are still healing from the trauma of the boarding school era and the violence that was inflicted on our children and families. White Supremacy is the foundation, the core of the United States educational system– a system that is still working to assimilate and indoctrinate our children to this day.”

“Indigenous communities all over Turtle Island have long fought for schools and educational systems that our children deserve,” says Barry. “Schools that honor Indigenous history, knowledge, culture, and language. Schools where our children feel both seen and heard. Indigenous people have always had the knowledge and resources for teaching our children and this is the kind of education that will both heal and empower our young people and their communities.”

As part of our mission to decolonize education and empower Indigenous children with culturally relevant curriculum, and in partnership with the NACA Inspired Schools Network, the NDN Collective will be opening the Oceti Sakowin Community Academy in South Dakota in the fall of 2022. The school is one of many self-determining Indigenous solutions to a long legacy of oppressive education for Indigenous people. The school will be a place where children are exposed to their language, culture, history, and instructed with pedagogies that draw upon Indigenous values of kinship and deep reverence for children.

“All children deserve to know who they are and see themselves in what they are learning,” says Mary Bowman.  “NDN Collective is also in partnership with NISN in opening a school in Rapid City that will bring healing from the historical trauma imposed by boarding schools because the school will be grounded in the thought and philosophy of the Oceti Sakowin (Seven Council Fires of Lakota, Dakota, and Nakota people). This type of education environment will bring healing to our children as they are given back what was taken– language and culture.”

NDN Collective’s Education Equity Team also recently organized a march and campaign fighting newly proposed social studies standards in the state of South Dakota that erase over a dozen different references to Indigenous people in the state curriculum. The Oceti Sakowin March for Our Children, organized by the NDN Collective and South Dakota Education Equity Coalition on September 13, also honored survivors of Indian residential and boarding schools with the color orange.

“The National Day of Remembrance and Orange Shirt Day also illuminates the correlation between the boarding school era of the past and current policy agendas in education today that are still oppressive,” says Sazue. “The ‘kill the Indian, save the man’ mentality is still alive and well in education, and we are actively fighting assimilation and indoctrination in school systems today.”

“Our work intends to bring healing and prosperity to future generations by directly addressing the ongoing racist policy agendas while offering solutions to disparities in academic achievement that come from our own people,” says Sazue. “As Indigenous people, we recognize the healing that occurs when those who have been silenced for generations are offered an opportunity to contribute to the solution.”

The generational damage caused by Indian boarding schools in the U.S. and Indian residential schools in Canada, cannot be understated. Today, our communities continue to fight for healing and self-determining solutions to the trauma caused by the generations of oppressive education policies and settler colonial policies, moreover.

Photos from the Oceti Sakowin March for Our Children, organized by the NDN Collective and the South Dakota Education Equity Coalition.

“Today I wear orange in remembrance of the Indigenous children who lost their lives as a result of racism and settler colonialism,” says Nick Tilsen (Oglala Lakota), NDN Collective President and CEO “We are fighting for a future that the next generation can see themselves in– a future where schools and education are tools for liberation and building cultural power.”

We also honor and recognize the power of just one story to build a movement. Much thanks to the gentle courage of Phyllis Webstad in sharing her story, Indigenous people across Turtle Island and worldwide are given the invitation to do their own healing work, too– to wear orange to heal, to remember, and to build collective power. So many of our very own mothers, grandmothers, fathers and grandfathers, each have their own version of an “orange shirt” story. We remember and fight for all of them, healing and organizing forward together.

“To those young ancestors who didn’t survive– you are loved, you are remembered, and we will not stop fighting for you.” –Korina Barry (Anishinaabe), NDN Collective Managing Director of NDN Action

Sarah Sunshine Manning, NDN Collective Director of Communications, is a citizen of the Shoshone-Paiute Tribes of the Duck Valley Indian Reservation in Idaho and Nevada, and Chippewa-Cree of Rocky Boy, Montana. Manning directs NDN Collective’s communications strategy and impact. She also serves as producer of the NDN Podcast While Indigenous and as editor of the NDN blog. Manning has Bachelor’s degrees in American Indian Studies, Social Science-History, and licensure in Secondary Education. She has a Master’s degree in journalism and mass communication. 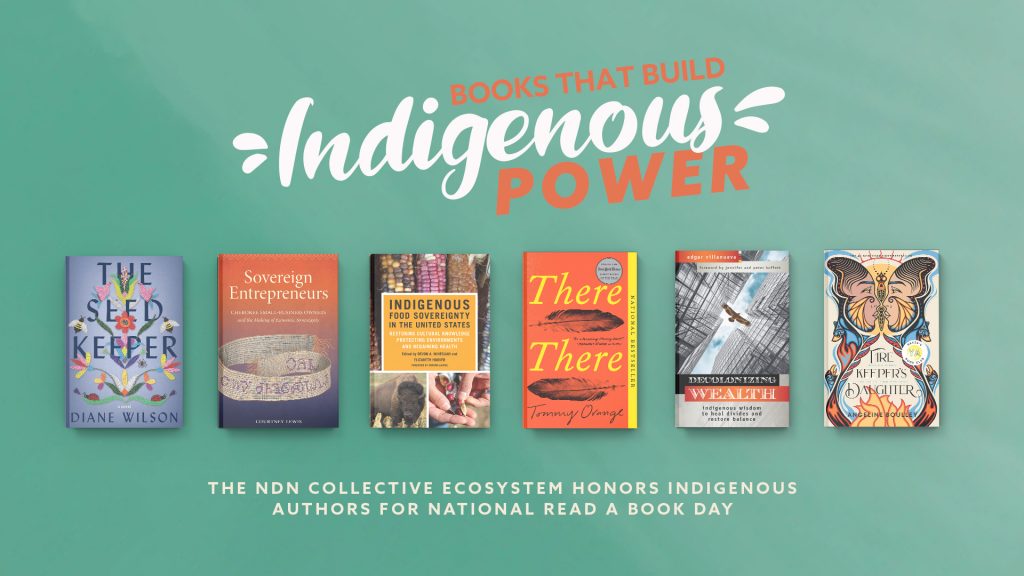 Posted 2 months ago Books that Build Indigenous Power
In Celebration of National Read a Book Day, Check Out What the NDN Collective Ecosystem Is Reading