Art as Activism: NDN Collective Collabs with Artists to DEFUND the Line 3 Pipeline

Artists create and call others to join the fight to stop Line 3. Nationwide wheatpasting action occurs with some 6,000 Defund Line 3 newspapers making their way to over 400 groups and activists.

As Indigenous Peoples continue to organize across the so-called United States and beyond in an effort to end extractive industries, there is one group of activists that deserve greater recognition and visibility: our artists. Whether visual art, digital art, music, or a combination, the impact of Indigenous art as a means of illuminating social and environmental injustice has been evident throughout history.

During the week of July 12th through July 18th, Stop the Money Pipeline  and NDN Collective added to this history, co-organizing the #DefundLine3 Arts Visibility Week of Action— a call to artists and allies to step forward and utilize their art to decry the continued development of the Line 3 tar sands pipeline.

In preparation for participation in a wheatpasting action for the #DefundLine3 Arts Visibility Week of Action, individuals could request a #DefundLine3 Newspaper from NDN Collective and Stop the Money Pipeline organizers. So far, roughly 6,000 newspapers made their way to over 400 groups and activists spanning multiple states across the U.S.

To date, hundreds of Indigenous leaders, Water Protectors and allies have been violently accosted, removed and arrested in their efforts to put a stop to the destructive Line 3 Enbridge project. Meanwhile, pipeline developers continue to ignore the sovereign rights of various Indigenous Nations whose homelands they are desecrating. Just this past week at the Red Lake Treaty Camp in Pennington County, Minnesota, Indigenous leaders in ceremony were violently disrupted by law enforcement who proceeded to aggressively arrest those who positioned themselves between law enforcement and those in ceremony– a blatant violation of the American Indian Religious Freedom Act.

The #DefundLine3 Campaign seeks to suffocate the financial backing of the Line 3 pipeline by prompting individuals to contact banks, CEOs and executives, calling upon them to  cease funding of the project. The #DefundLine3 Arts Visibility Week of Action further amplified these efforts, providing the tools and creative direction to allies and organizers across Turtle Island to join in on the campaign.

Leading up to the  #DefundLine3 Arts Visibility Week of Action, NDN hosted an art deployment webinar, providing instruction on art-based tactics for participants to deploy in their home communities during the week of action. Participants were introduced to art-based tactics involving newspaper posters, street murals, banner drops, street theater and more, as  vehicles of expression to highlight the change necessary to preserve and protect the land and people.

During the week of action, participants wheatpasted #DefundLine3 art across various states across the U.S., with some 6,000 #DefundLine3 newspapers making their way to over 400 groups and activists.

“There were a lot of moving parts for this project including shipping and designing the entire process itself,” said Wagoner, a collaborating planner for and contributing artist to the project. “There are definitely areas that [project collaborators] can improve on, but we look forward to providing more opportunities for projects and trainings in the very near future.”

David Solnit, prominent organizer, author, artist, puppeteer and co-founder of Art and Revolution, also served as a co-coordinator of the project, utilizing his experience and craft in leading others in art action.

For those interested in taking part in the Stop the Money Pipeline #DefundLine3 art actions, the Defund Line 3 Art Kit is still available, and contains an array of project opportunities, including songs, banners, stencils, virtual banners, street murals and more.

NDN Collective will be sharing more on the artists who contributed to the Defund Line 3 Newspaper in the future. Visit the Stop the Money Pipeline website for more ways to take action in the fight to stop the Line 3 tar sands pipeline.

Brandi Douglas (she/her), NDN Collective’s Senior Communications Associate, is a Puyallup Tribal member as well as Black and Mexican, from Washington state. In her role, she provides support to the Communications and Narratives Team as well as all aspects of content production and targeted outreach. Brandi is an avid wordsmith, having uplifted various narratives that speak to the experience of being an Indigenous entrepreneur, woman of color and queer. Brandi holds a bachelor’s degree in Global Studies from the University of Washington as well as a master’s degree in Indigenous Peoples Law from the University of Oklahoma.

June 2022 Edition
A monthly recap of the indigenous world.

Posted 3 days ago NDN Collective Responds to Supreme Court Overturning Roe v. Wade
“This is yet another attack by the settler state to risk the safety of our most vulnerable and eliminate the possibilities of full, healthy, and affirmed lives.” 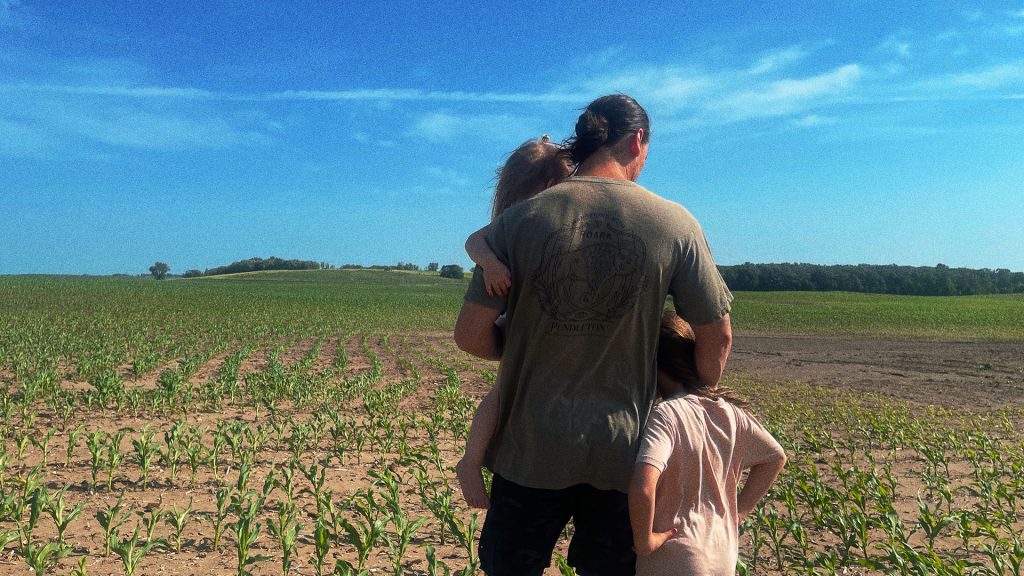 Posted 1 week ago Fatherhood is Ceremony: Q&A with an Indigenous Father Prioritizing Healing and Family

We sat down with our very own Jordan Brien, Creative Director for NDN Collective, to talk about fatherhood and healing. His story ignites hope for a generation of Indigenous parents who are actively working to break colonial cycles of trauma while strengthening the family unit.

Posted 2 weeks ago NDN Collective Responds to White Nationalist Group’s Planned Riot at Idaho Pride Celebration
“Anti-queer and trans hate is the product of genocide and colonialism – before white settlers arrived and began to wreak havoc on our people, Indigenous communities embraced our LGBTQIA2S+ community members." 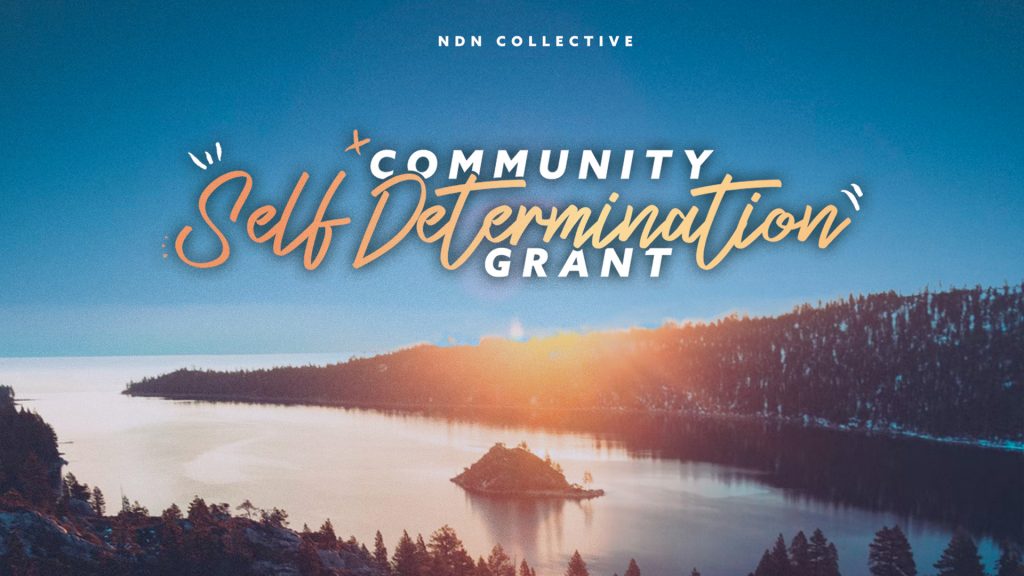 Posted 2 weeks ago NDN Collective Launches 2022 Community Self-Determination Grant: A Power Building Opportunity for Indigenous Communities
The application for the 2022 Community Self-Determination Grant is now open to Indigenous communities throughout Turtle Island. This grant opportunity is intended to build Indigenous Power throughout our Nations with significant, flexible, multi-year funding. 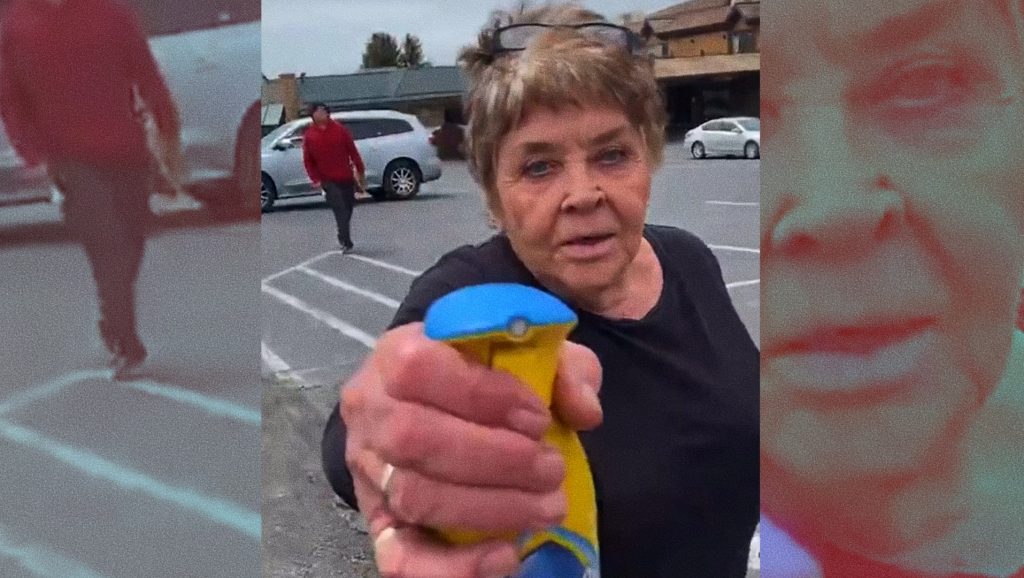 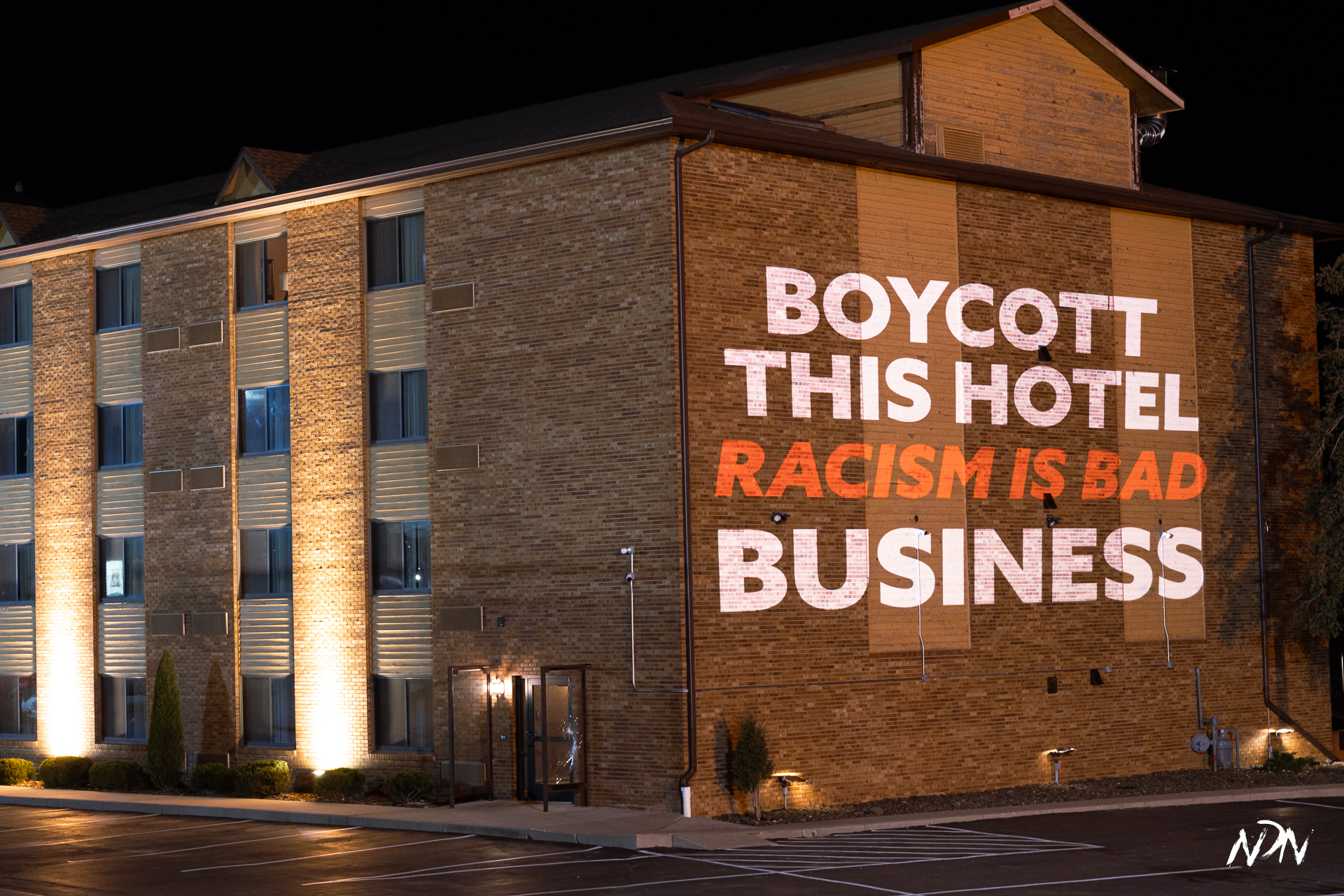 Posted 1 month ago Boycott Ramps Up With Light Projection, Support for NDN Collective From Rapid City Businesses
“We love our community, we love our people – and because of that love, we won’t back down until Rapid City creates concrete consequences for any businesses that have racist practices and policies.”

Posted 1 month ago NDN Collective and Local Native Organizers Provide Support for Those Impacted by Wildfires in New Mexico
NDN Collective’s Climate Justice Campaign joined with the Coalition to Stop Violence Against Native Women to distribute dozens of air filters for those impacted by the wildfires in New Mexico. The wildfires have been raging for over a month, spurred by unprecedented winds and drought which have consumed nearly 237,000 acres so far. 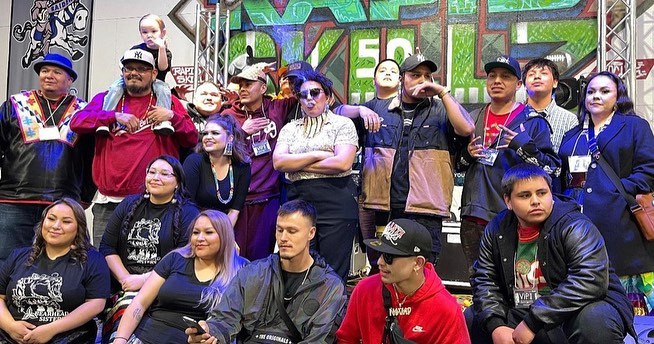 Over a thousand people came together for the first-ever For the People Festival headlined by over a dozen Indigenous artists from across Turtle Island, after an earlier planned event went awry. 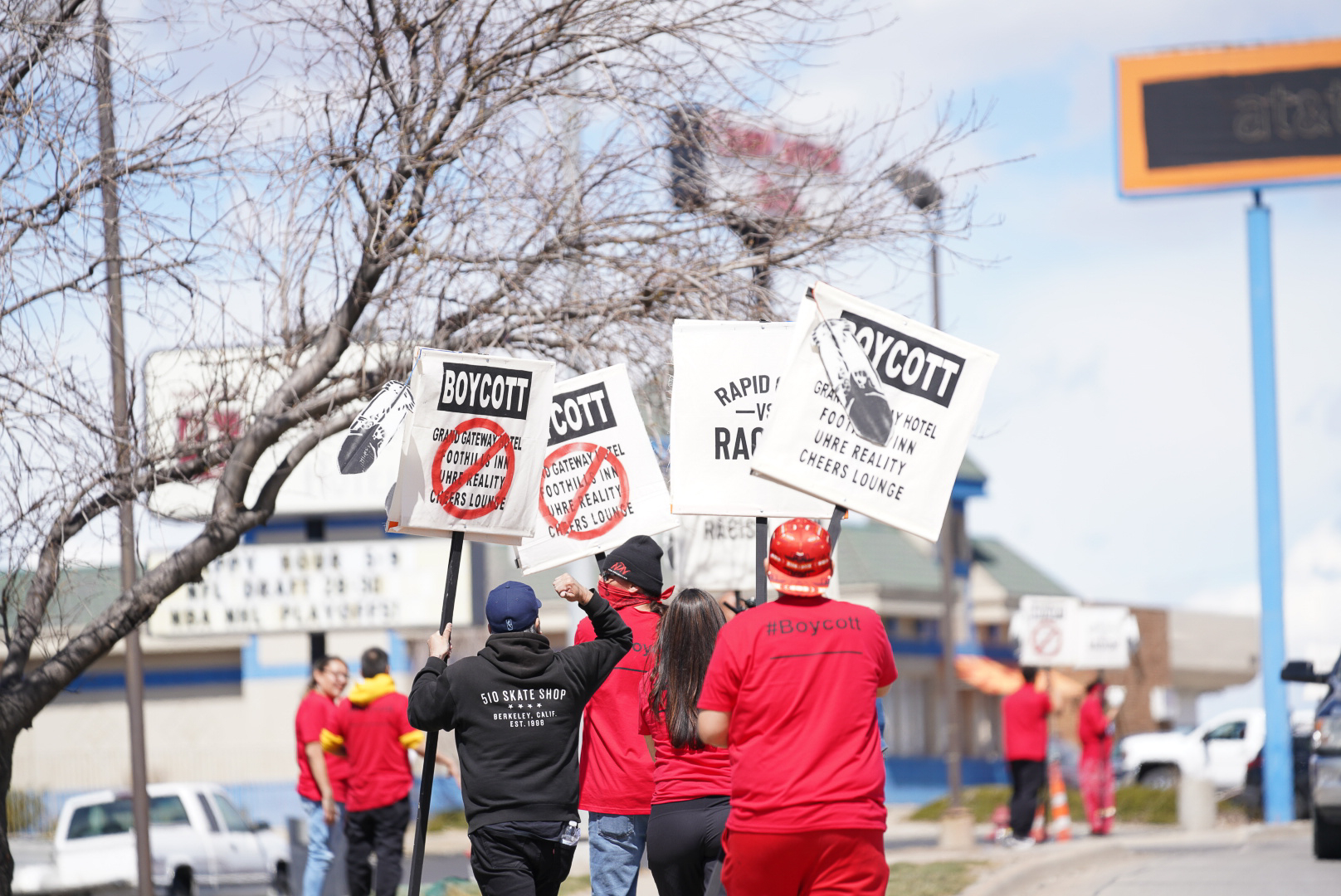 NDN Collective and a growing coalition of community members are mobilizing a boycott against the Grand Gateway Hotel and all Uhre-owned family businesses in response to discrimination and racist business practices.

On Mother’s Day and every day, we acknowledge our Matriarchs. Every moment of action and vocalization of truth for the betterment of the collective has been a testament to the reclamation and power to lead as they always have.